As of 2018, Jamieson Dean Photography is closed permanently. Thank you to all clients who's weddings I had the pleasure of shooting over the years. Note, for clients who's weddings were within the last two years to date, I will still honour creation of any outstanding books or products included in your original contract.

My assistant and the mother of the groom were MIA for about four hours, as they were being detained in the US and questioned.

Let’s work backwards from there. Why were they being detained and questioned by the US border guards? Well, mainly because they tried to cross the border in my car, with only my ID, and couldn’t even tell the guards what each other’s names were. That makes sense; I would expect the boarder guards to be a bit suspicious in that case. But then the question of course begs; why were they trying to cross into the US?  Well, apparently when you’re THAT close to the border, a simply wrong turn can put you in that border crossing lane. So they didn’t mean to even approach the border, but were given incorrect directions from the third Best Buy sales guy who was trying to direct them to a nearby Futureshop. Of course we now are wondering; why were were the groom’s mother and my assistant going to a bunch of electronics stores…in MY car? That’s an easy one to answer; Marina and Dan had a slideshow on a Macbook that they wanted to play during the reception, but no mini DisplayPort to VGA cable to hook it up to the projector. I saw how upset this made them, asked my assistant to take my wallet and car, head to the nearest electronics store, and buy that cable. The groom’s mother needed a ride to the nearby hotel to grab something, and it was on the way.

So in the end, they did manage to stop-off at one more Futureshop and did find the cable! The slideshow happened, and we have quite the story. It definitely made for an interesting wedding day!

The reception was held at the beautiful Chateau Des Charmes in Niagara. 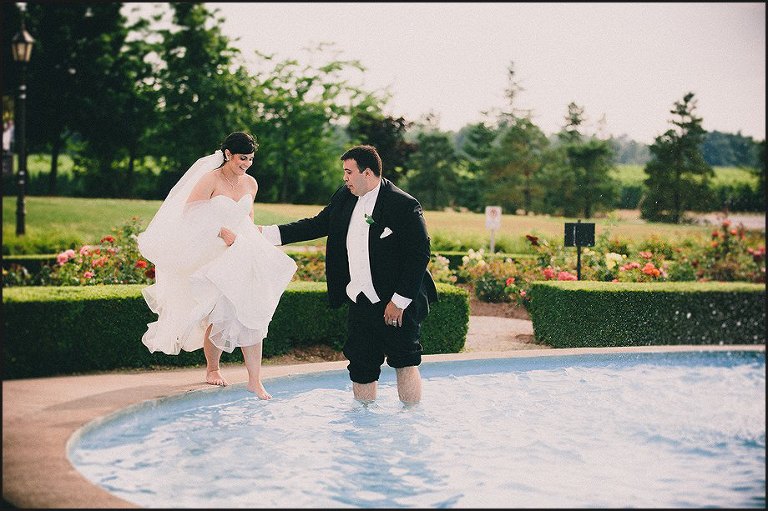